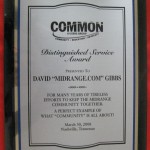 Today I was honored by the COMMON organization with it’s highest award … the Distinguished Service Award.

Although I did have a slight inkling that something was in the works … due to a flub by Anne Lucas in the mailing list … I really wasn’t prepared for it.

I was presented with the award during the conference opening session …. in front of all my peers, colleagues, and friend.

The award reads … “For many years of tireless efforts to keep the midrange community together. A perfect example of what ‘Community’ is all about!”.

I know that Trevor Perry was in a bit of a panic … and having a field day at the same time. Panic because he was trying to track me down so I would be ready to receive the award at the opening session (I was running a little late) … fiend day because he knew what was going on and knew I was suspicious.

Considering who else has been given the award … I consider myself to be quite lucky and somewhat unworthy.

(NOTE: This post is being written well after the award was presented … I realized I had never actually written one about it before.)