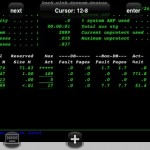 The folks at Mochasoft have come out with a new 5250 client for mobile devices … this one for the iPhone.

There are two versions in the Apple iTunes Store … a free ‘Lite’ version and the full version for $29.99.

For what it does, the $29.99 cost is not unreasonable … although I haven’t purchased the full version yet (not sure I’m going to, as I really don’t have much need for it).

As with most good iPhone applications, the 5250 emulator works in both portrait & landscape mode … sensing the orientation of the phone automatically. In landscape mode it’s quite usable for most basic operations.

It appears there are a total of six system’s you can connect to … although I’ve only entered one so far. It supports multiple code pages, 27×132 and 24×80 display modes, column separators, multiple fonts, and a number of other settings.

Each system can be configured with a host name or IP address, port (defaulting, as you would expect, to 23), SSL, device name, user id, and password (careful with those two, as they may be security risks).

I connected to one of our the systems at work (via our VPN) and did a few commands … keyboard entry is awkward, but not unbearably so. When you want to type a command, the iPhone keyboard does pop up and eat up a significant portion of the screen (especially in landscape mode), but if all you need to do is press F5 to refresh WRKACTJOB or WRKSYSSTS, you can see the full screen without a problem.

The “Enter” and “Tab” keys are at the top of the screen and pretty easy to use. Cursor positioning is a bit difficult in the lite version, as you have to touch the screen where you want the cursor positioned. I imagine the cursor keypad would resolve that.

You can re-size the screen with the normal iPhone gestures (two finger pinch & expand) … similarly you can move around the 5250 screen by dragging your finger around.

All in all, I think it’s quite a worthwhile application … not something I would want to do programming on, obviously, but if I needed to check the status of a job or respond to a message on QSYSOPR, quite adequate for the job. If you’re a system administrator, and have an iPhone, I would highly recommend this app as a useful addition to your toolkit.