Originally I wasn’t going … but a scheduling problem with another person in my office came up and I got tagged to pinch hit for him.

So far the conference is going well … although I’m only here for the “Solution Center” expo (no sessions) … I’m enjoying it.

The conference is much more oriented towards hardware and system management people. There are a few application development sessions on the grid, but not that many. I’m pretty sure there are zero sessions on Java & RPG programming. A few on SQL & PHP.

The expo itself had a lot of energy last night, the first night it was open, with people hitting all the booths to get their ‘bingo’ card filled up (not sure what they are drawing for).

A few things I’ve observed right off the bat (keep in mind, my only previous big conference experience has been COMMON) … 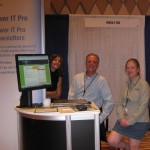 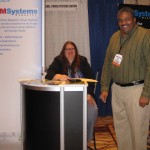 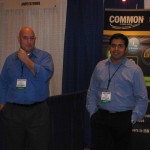 There are only few midrange.com subscribers here (maybe some potentials though). Bryan Dietz scored a midrange.com ball cap.

Oddly, it just doesn’t seem like a ‘real’ conference when I’m not running into Scott Klement, Brian May, or Trevor Perry (just to name a few) every 10 minutes. 😉

From a purely logistical perspective … the hotel the conferences is at, the Rio, is OK. Not great, but not that bad.

Wifi in the conference are is reasonably good … although there are some areas with poor coverage.

The hotel isn’t that expensive … I think it’s $139/night. The room is comfortable & big. It’s a bit dated though.

The hotel’s internet is expensive … as usual. $14/day. Although I don’t think I’ll have to pay for it, as my connection had problems and I had to work with the ISP to get it resolved. Ironically if you have a problem with the internet connection you have to call a 800 number … but the hotel charges for 800 number calls (I’ve never understood that). I had to call the managers office to get them to connect me without a charge. I ended up getting my problem escalated to tier 2 support to get it resolved.

The expo is open again this evening and tomorrow around lunch time … so if you’re reading this blog, stop by the MKS booth and say hi.

On a personal note, this is my first time in Vegas … and it probably won’t become a destination for me in the future. Gambling isn’t my thing. That said, I did buy tickets to see the Penn & Teller show tonight.