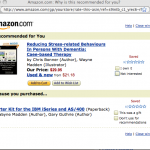 A co-worker was shopping for books today and noticed that amazon.com knows a bit about our industry (well, HIS job at least … he’s not an IBM i guy).

I would really be interested in knowing how amazon.com came up with that particular recommendation. Maybe it’s because he’s using a Mac (window buttons in the upper left hand corner are tell tale).

Even so … I would think, since you don’t have to worry about viruses; database & program incompatibilities; etc, using an IBM i would make for a far less stressful environment.

Perhaps it’s actually a reverse recommendation … which I happen to agree with … anyone NOT using an IBM i should be evaluated for dementia.

Actually … on second glance … it appears that the recommendation is being made because “Wayne Madden”, publisher & editor at System i Network, is listed as author of the IBM i book and illistrator of the other book.