While Norm did make the comment in jest … he does make a very good point … what the heck DO we call the system?

Yes, I know, it’s an often argued topic in the community … and it’s been beaten to death. But the fact that it keeps coming up indicates that it remains a sore point.

Personally, I alternate between AS/400 and iSeries. Occasionally I’ll refer to it as “IBM i”. Most everyone else in my office calls it the “400”.

Let’s look around, shall we? 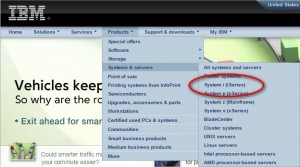 Hmmm … they refer to it as both “System i” and “iSeries”. To be fair, when you follow the link they do call it “IBM i”.

COMMON covers all the bases: “Power Systems (IBM i, AS/400, iSeries, System i, AIX and Linux)”, and the names show up in relative order of familiarity. One could argue the names should show up in chronological order, but that is just picking nits.

Zend calls their product “Zend Platform for i5/OS” … but also makes mention of IBM i on the same page.

My own employer, MKS, uses the new name for marketing purposes “MKS Integrity for IBM i” … but internally it’s referred to as the “System i”.

Security experts PowerTech use “System i”, “iSeries”, but mostly “AS/400”.

Help/Systems seems to favor “System i”.

As for the names themselves … initially, I didn’t like “iSeries”, but it grew on me. I don’t like “System i” or “IBM i” at all. At least iSeries is very searchable. If you go to Amazon.com and search for iSeries, just about everything you find will be appropriate. Search for “System i” or “IBM i” and you get gobs of hits … 99% of which are totally irrelevant.

At the end of the day, however, the big issue is not what the name is … but the fact that the name has changed so often. That’s what causes confusion.
Nobody gets confused when talking about the Windows name … whether it’s Vista, XP, NT, 98, etc. They are all “Windows”.

I really wish they had chosen a name and stuck with it.